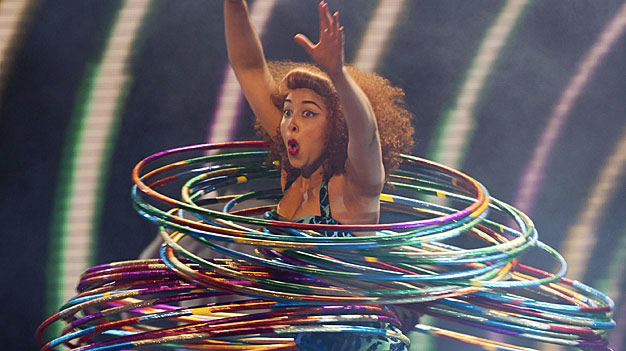 One
Hoops made from grapevines, reeds, supple twigs, or branches bent into a circle were used by both children and adults in ancient Greece, Rome and Egypt.

Two
Recreational hooping was very popular in 14th Century England, and both children and adults played games with, and swung, hoops on their bodies.

Three
It appears that hooping became known as hula hooping around the 18th Century when British sailors and missionaries noted that it involved similar hip movements to Hawaiian hula dancing.

Four
In 1936 hoops were first introduced into rhythmic gymnastics at the Olympic Games, but at first they were only decorative.

Five
Native Americans have been performing storytelling hoop dances for centuries using hoops made from reeds or wood.  The hoops are used to form static and dynamic shapes representing things such as butterflies, turtles, eagles, flowers, and snakes.  It is still practised today though in a modern context.  Traditionally it was practised almost solely by men but women are now allowed to participate as well.

Six
The first plastic hula hoops were made in 1957 in America.  They were inspired by the bamboo hoops that had become very popular in Australia at the time.

Seven
The longest verified record for keeping a hula hoop spinning is held by Aaron Hibbs from Ohio who kept a hoop spinning for 74 hours and 54 minutes between October 22 through 25, 2009.

Eight
Wii Fit has a hula hoop game and also a Nikelodeon game where Dora and Boots are hooping.  The highest score on Wii Fit Plus Hula Hooping (Wii) is 333 and was achieved by Lydia Finn (UK) in Lancashire, UK on 10 February 2015 (although this may have since been beaten)

Nine
The most hula hoops spun simultaneously is 200 and was achieved by Marawa Ibrahim (Australia) in Los Angeles, California, USA, on 25 November 2015. This is Marawa the Amazing’s 4th time breaking this record. Her previous record was 160 Hula Hoops twirled simultaneously. (Marawa is pictured above – www.marawatheamazing.com)

Ten
In 2009 In2Hula set the New Zealand record for the largest number of people simultaneously hooping.