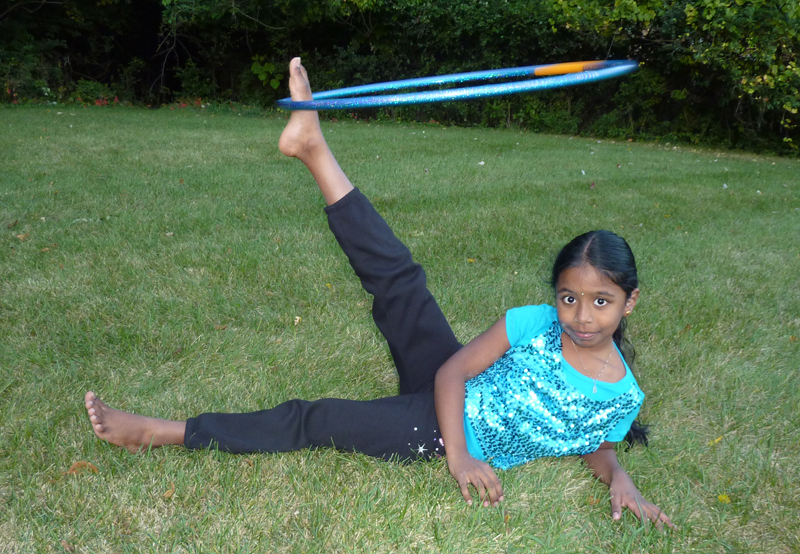 We at In2Hula are great believers that age is just a number and does not define what you can and cannot do.  This post is about an inspirational hooper who has demonstrated passion and skill from a very young age.

Mridula Shanker is a young girl who lives in America.  She taught herself to hoop when she was six years old by watching videos online and practiced for about an hour a day to master the skills.  Here is a video of her demonstrating her hoop dance skills when she was 7 years old:

Mridula has also spun herself into the Guiness Book of Records.  She still currently holds the records for Most Hula Hoop Rotations Around Foot While Lying Down (175), Longest Time Hula Hooping Around Foot While Lying Down (71 minutes, 35 seconds), and Longest Hula Hoop Rotation On One Leg by a 7 year old (14 minutes, 1 second).  In 2011 she also set the world record for Longest Time Hula Hooping While Standing on One Leg, but her time of 40:21.04 was beaten in 2015 by about one minute.  In October 2013 Mridula became the world record holder for the highest number of hula-hoop rotations (166) in one minute in the arabesque position.

I think her father summed up her achievement well and can inspire us all with his comment: “If she does everything with passion and love, she can do anything.”

featured image is from: http://news.a2schools.org/northside-student-earns-world-record-again/